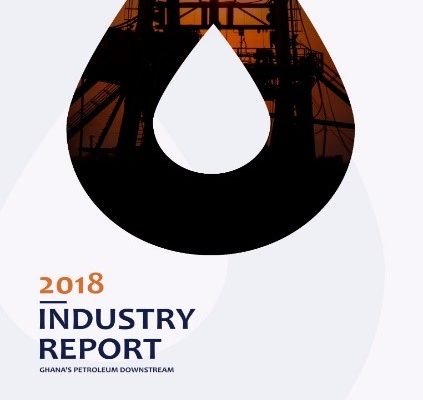 A review of the 2018 fiscal year, outlook and recommendations by CBOD.

The Industry Report is an annual publication of the review of the petroleum downstream industry, covering policy, finance, market and infrastructure. In this edition, which reviews the 2018 fiscal year, a newly added chapter focusing on the review of the gas sector was produced by the Africa Center for Energy Policy (ACEP). The report also featured the LPG promotion policy and other key policies such as the HSSE and Ghanaian Content and Ghanaian Participation policies. The 2018 report presents an outlook and some recommendations on the downstream market such as the implications of MARPOL 2020, the impact of Dangote Refinery and a way forward for Tema Oil Refinery.
The report looked into issues of tax evasion, smuggling and revenue losses in the petroleum downstream industry. The good news however for the year was that the National Petroleum Authority’s regulatory interventions helped to curb illicit trade, thereby saving the nation GHS797.49 mn in taxes and GHS154.93 mn in regulatory margins. There was progress made on the government’s legacy debt and some infrastructure developments as well.

The regulation and policy space didn’t see material change despite the change in leadership- John Peter Amewu replaced Boakye Agyarko as Minister of Energy. The dominant policies were the LPG Promotion Policy and the tackling of export dumping and smuggling, which was the most successful. The LPG Promotion Policy Implementation Committee, tasked with planning, oversight and implementation of the national LPG policy expects to complete its work in the last quarter of 2019. This involves the rollout of the Cylinder Recirculation Model (CRM) which would begin with the importation or purchase of LPG by the Bulk Distribution Companies (BDCs). The BDCs will resell them to LPG Bottling Plant Companies (LBCs) for the sole purpose of filling empty cylinders for distribution by LPG Marketing Companies (LPGMCs).
The implementation of the CRM is expected to involve a relatively higher cost of transportation of bottled gas and logistics, as well as a rise in the pre-tax value of bottled gas. This, however, threatens the success of the entire project.
At the heart of the cylinder recirculation policy is the issue of safety, and so in the implementation, the LPG refilling stations will be classified into low, medium and high risk in line with safety standards by the NPA. Improving safety in the delivery of LPG would reshape the existing market; resulting in a retail disruption that would be driven by the Oil Marketing Companies (OMCs) licensed to retail LPG in addition to the traditional liquid fuels. Health, Safety, Security and Environment (HSSE) risks, under the CRM program, will likely be minimized but accountability and inadequate enforcement remain the core problems now and in the future. Between 2015 and 2018 14 HSSE incidents were reported, claiming 178 lives and injuring 350. The most catastrophic, the twin disaster (fire and flood) occurred in 2015 at the GOIL retail station around the Kwame Nkrumah Circle, Accra.
The bottling company facility is the key infrastructure required for the CRM. As a September 2019, The Tema Multi-Product Terminal (TMPT), was fully constructed. Meanwhile, Quantum Terminals’ plant is scheduled for completion in 2020.

CBOD, CEO Senyo Hosi presenting highlights of the 2018 CBOD Industry Report.
Prioritising Ghana is essential in reforming the industry and the government seeks to achieve this by deploying effectively the Ghanaian Content and Ghanaian Participation policy. Downstream petroleum activities shall incorporate Ghanaian content as an important element, nonetheless, foreign participation may occasionally be required because of the introduction of new technologies. Furthermore, the policy contradicts the broad vision of the government’s petroleum hub agenda. There is a potential resistance by foreign companies to the policy that could threaten its smooth implementation. In ensuring Ghanaian content compliance, the regulator (NPA) must be wary of fronting for foreign companies by Ghanaians.
As regards Petroleum Service Providers’ (PSPs) licenses, 26 BDCs as of the second quarter of 2019, were in good standing out of 35 BDCs licensed in 2018. Over the 2018 fiscal year, 24 (67%) out of the 35 BDCs imported products, resulting in a reduction, compared to 2017 when 31 BDCs (76%) imported products, out of a total 41 companies. Seven BDCs imported products above 100,000mt, accounting for 72% of total BDC imports. Six companies, representing 13%, imported products above 50,000mt, but below 100,000mt, while 11 BDCs, accounted for 6% of total import, brought in cargoes below 50,000mt.
For the Oil Marketing Companies, despite a GHS7,000 upward review of the OMC license fee from GHS23,000 in 2017 to GHS30,000 in 2018, the number of OMCs grew from 96 in 2017 to 112 in 2018 – a 17% growth. Players here have since 2011 increased from 53 to 115 players in quarter two of 2019.

The Industry Report’s financial review reported some good news as the reconciliation of official national stock revealed no stock loss because 574.25mn litres above the official stocks were sold. The industry, however, saw a GHS2.7bn revenue loss as a result of tax under-reporting and evasion between 2015 and 2018. The government made progress on the legacy debt to the BDCs, with the payment of an amount of USD123.33mn (GHS648.93mn) by the government in June 2019.

Ghana’s Gross National Consumption reached 4.46mn metric t0nnes; 83% (3.73mn metric tons) of which was consumed by the non-power sector and the power sector consumed 17% (738,076 metric tons). The consumption of petroleum products went up by 12.3% from 3.4 mn metric tons in 2017 and reached 3.88mn metric tons in 2018. The increase in the volumes of petroleum products consumed was the highest, to date.
A surge in the number of registered vehicles in the country is attributed to the gasoline and gasoil demand hike. The Drivers and Vehicle Licensing Authority (DVLA) has for about the last decade been registering more and more vehicles in the country, from 101,498 in 2008 to 175,103 in 2018 – a 72.52% increase. In analysis, the number of registered vehicles significantly impacts the consumption volumes of petroleum products (gasoline, gasoil and LPG).
The most consumed product was gasoil – 1.83mn metric tons consumed in 2018, a 10% increase from the 1.66mn metric tons in 2017. The surge was spurred by increases in the consumption of gasoil regular by 19%, gasoil mines and gasoil rigs by 8% and 16%, respectively. Gasoline consumption also increased by 17% from 1.07 mn metric tons in 2017 to 1.25 mn metric tons in 2018.
The average 2018 International market prices for gasoline and gasoil increased by 22% and 33%, compared to 2017. This made it the primary driver of the pump price increases in 2018, accounting for about 53% of pump prices compared to 45% in 2017.
The IMO Marine Environment Protection Committee decided in October 2016 on the steep reduction to a 0.5% sulphur cap globally by 1st January 2020. Enforcement of MARPOL 2020 will impact the movement, demand and supply of petroleum and petroleum products. The switch from the use of High-sulphur fuel oil (HSFO) to compliant fuel will have a direct effect on fuel cost and freight rates as well.
Ghana remains the only country that enforced price deregulation for the major products in its market within the West African sub-region. However, Africa’s largest oil producer, Nigeria, has a dual pricing mechanism: the fully liberalized gasoil market and the regulated gasoline market where prices are subsidized periodically.
The national storage capacity increased to 2.18mn m3 in 2018 from 2.093 m3 in 2017. The largest storage providers of petroleum and petroleum products were government-controlled entities, while Tema Tank Farm ltd was the largest private-sector storage provider. The national storage capacity is expected to be augmented by Woodfields and Quantum which projects should be nearing completion as the year draws to a close despite delays in Quantum’s.

The all-new chapter for the 2018 edition, produced by the Africa Centre for Energy Policy (ACEP) provides some perspective on the gas sector. The growth of demand for gas will be influenced by the power sector. It is expected there will be excess gas from domestic sources and from Nigeria. High gas prices may slow the industrial use of gas. Analysts predict there will be excess gas from LNG imports – as the primary demand for gas is for electricity production. Gas supply is expected to outstrip demand and this risk of excess gas potentially threatens government finances. Financial challenges in the energy sector would be compounded, with the ultimate financial burden falling on the shoulders of consumers.
The petroleum downstream industry is crucial to Ghana’s holistic development, accounting for 16% of the country’s import bill and more than 12% of tax revenues. As such policymaking needs to be well informed with thorough data analysis and in good time. The effective use of data will result in increased transparency which will de-risk the sector and ensure its transformation effectively. The CBOD report posits that accessible timely data could have mitigated the GHS 7bn revenue losses.
Going forward, the CBOD makes some some more recommendations for other areas for the future;
“The regulatory framework for penalizing perpetrators of the illegal trade within the NPA needs a review to enable its administrative measures to be punitive enough and empower them to swiftly administer or ensure the punishment of culprits.
The first effort of the government should be to wipe off the excess domestic gas by encouraging existing power plants to switch from using liquids, such as HFO and RFO, to generate electricity. This will bring relief on the take-or-pay commitments of government.”
Source: CBOD Industry Report (2018)

Click on the link below for details or the full report
https:// cbodghana.com/download/cbod-industry-report-2018/