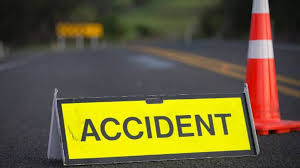 General Lance Corporal Frank Anokye of the Ghana Police Service has met his untimely death after being run over by a fuel tanker at Tema Community 16 Junction, MyNewsGh.com has confirmed.

According to the Sakumo Police who confirmed the unfortunate incident to MyNewsGh.com, the tanker driven by 60-year-old George Kessor with registration number AS 3840-C was from Sakumono Estate Junction heading towards Vivian farms.
At a spot near community 16 junction, the suspect driver decided to make an authorized ‘u’ turn back to Aklika and in the process dashed onto the lane of unregistered Yamaha XMS 250 motorbike being ridden by deceased policeman with service number 45167 from Shalom spot.

Corporal Frank Anokye who became unconscious after he sustained severe injuries as a result of the accident, was rushed to the C&J Medical centre for treatment, but he was later referred to the Tema General Hospital for further treatment but died whilst on admission

His body has since been deposited at the said hospital morgue for autopsy while the suspect driver is in police custody assisting with investigations.

Police identified the deceased as a personnel with the Teshie District Police Command.