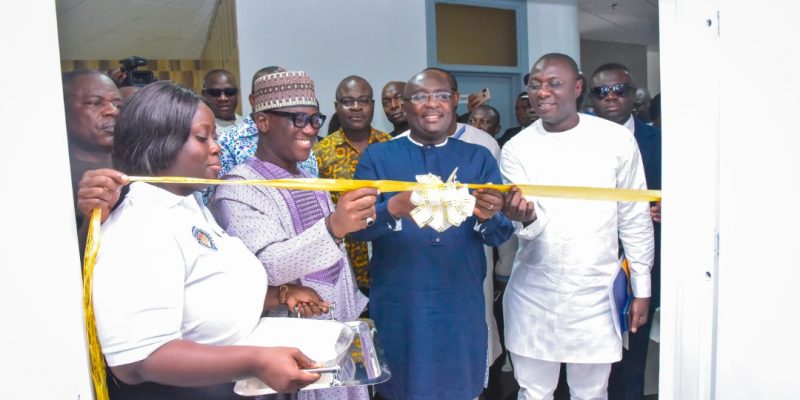 The Vice President Dr. Mahamadu Bawumiah has inaugurated a state-of-the-art Command Centre for the National Petroleum Authority’s Bulk Road and Electronic Cargo Tracking Systems to control and monitor the distribution of petroleum products across the country. This technology will also help curb illicit activities in the petroleum downstream industry.

According to the NPA, the dominant use of road transportation or BRVs in the supply chain is associated with many challenges such as transit product shortages and false haulage claims. The NPA in 2014 introduced the Bulk Road Vehicle (BRV) tracking system to ensure transparency in the movement of BRVs.
Chief Executive of the NPA Hassan Tampuli speaking at the launch in Accra on Tuesday, January 14, 2020, lamented how the NPA was in the past exploited by transport service providers because of the absence of an effective tracking system.
“It was estimated that the revenue loss as a result of these fraudulent practices amounted to about 12.3% of annual freight paid. The estimated revenue loss in 2014 was then about GH¢43 million”, he said.
The Vice President Dr. Bawumia who officially launched the new tracking system and command centre said the government is concerned about the illegal activities in the industry which undermine revenue collection and maritime and national security.
“ It is estimated that these illegal activities cost the country over USD 200m per annum in the form of lost direct petroleum tax revenue, subsidies that do not get to the targeted constituencies, and abuse in transport claims for transportation of petroleum products among others”.

This new technology is part of the NPA’s broader agenda to ensuring efficiency and fighting corruption in the petroleum downstream sector. The 2018 CBOD Industry Report stated that the NPA’s regulatory interventions to curb the illicit trade of petroleum products which forced sale through official channels only saved the nation GHS 952.43m in both taxes and regulatory margins.

The Vice President commended the NPA’s initiative saying, “This is yet another example of how we can leverage on technology to tackle some of the problems that continue to undermine our ability to build the Ghana we want”.
He also hinted at digitizing premix fuel to check wastage and illegal smuggling.

The National Command Centre is a 24-hour facility for the Bulk Road and Electronic Cargo Tracking System to control and monitor petroleum products distribution from imports and refinery production to the retail outlets and bulk customers across the country.