The Natural Gas Crash Isn’t Over

The Natural Gas Crash Isn’t Over

Natural gas prices have fallen sharply after spiking to multi-year highs in late 2018, and prices could fall further still.

The U.S. entered the peak winter demand season with gas inventories at a 15-year low, which left the natural gas markets vulnerable to unexpected bouts of cold weather. In November, Henry Hub natural gas prices jumped as high as $4.80/MMBtu, the highest price in roughly four years. The combination of low inventories, structural increases in gas demand from new power plants and exports, and the seasonal spike in demand from cold weather, led to a sharp and sudden spike.

But sky-high prices did not last long. By mid-December, natural gas prices were back below $4/MMBtu, and by early January, prices had fallen back to $3/MMBtu.

Inventories are still significantly below the five-year average. As of the last week in December, gas storage levels stood at 2,705 billion cubic feet (bcf), according to the EIA, or 450 bcf lower than at the same point a year earlier and 560 bcf below the five-year average. In other words, prices fell despite the fact that the total amount of natural gas in storage is historically low. Prices came down at least in part because January has started off with mild weather, easing pressure on supplies.

Another reason why natural gas prices fell back is precisely because prices rose to painfully high levels. Utilities dialed back on gas-fired generation, while coal plants ramped up operations. As such, there is somewhat of an automatic cap on prices if they rise too high. Demand destruction and generation alternatives ease pressure on gas markets.Related: Has U.S. Fracking Activity Peaked Already?

Yet another reason why gas prices fell back from November’s highs was because of financial positioning from speculators. Hedge funds and other money managers bought up bullish positions in the weeks and months preceding the November price spike. Once prices rose close to $5/MMBtu sentiment began to shift. Utilities began to curtail gas generation, mild weather moved in, and the cycle seemed to head in the other direction. Investors sold off their bullish positions, which helped drag prices down.

But prices could fall even further. In fact, Bank of America Merrill Lynch argues that there could even be “congestion” at storage facilities as soon as this summer. “Looking into the months ahead, continued mild weather this winter could bring forward the risk of storage congestion to summer 2019, putting the forward curve at risk of even lower prices,” Bank of America Merrill Lynch wrote in a note.

Downward pricing pressure could continue in the weeks ahead. Current weather models put U.S. natural gas demand at roughly 10 bcf per day (bcf/d) below average for the first half of January, “bailing out ill prepared consumers,” BofAML wrote.

Even if the mercury does plunge unexpectedly, which would drain U.S. natural gas storage levels down to historically low levels, it may not be too much of a problem. “Cold weather during the balance of winter could lead to total inventories near 1.2 tcf by end of March, but is unlikely to be much of a concern given robust injections expected this summer,” BofAML said.Related: Who Are The Biggest Winners In The East-Med Gas Game?

In other words, U.S. natural gas drillers are breaking records and are expected to replenish depleted storage levels in short order. The Marcellus and Utica shales continue to see explosive production growth. In January, the EIA forecasts output in the Appalachia region to hit 31,451 mcf/d, up 414 mcf/d from a month earlier. 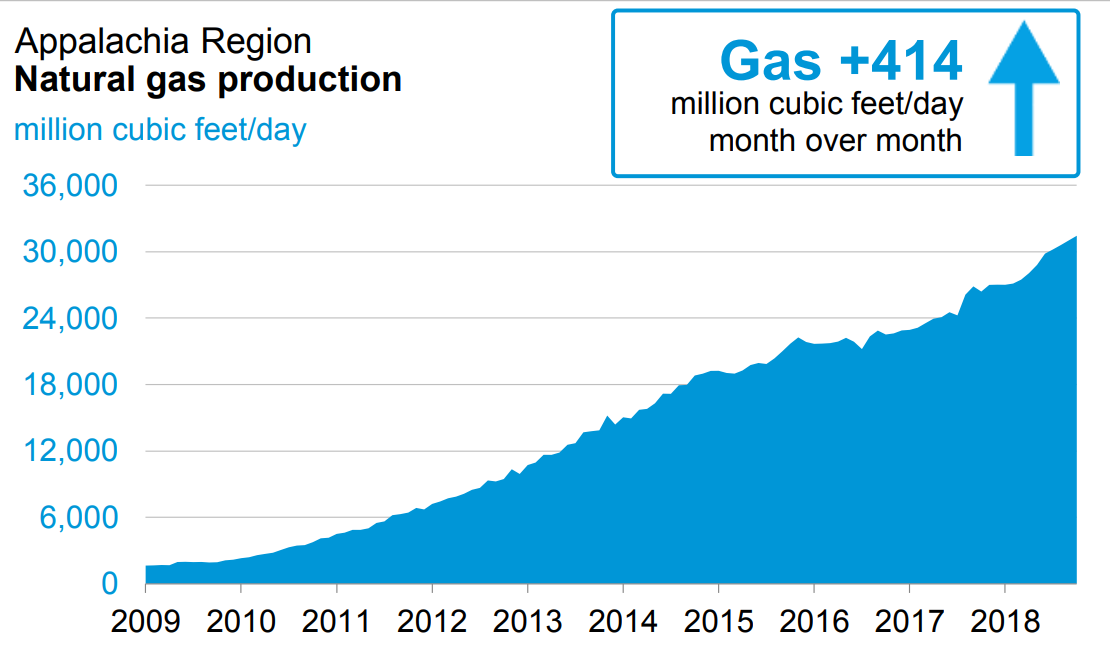 The Permian too is seeing rapid production growth. The EIA expects gas output in the Permian to jump to 12,736 mcf/d in January, up 258 mcf/d from December. Gas supply in the Permian has grown so quickly that the region’s pipelines are ill-equipped to handle the rush of new volumes. The wave of fresh gas supply has at times pushed regional natural gas prices in West Texas below zero.

The Permian is also home to an epidemic of gas flaring. According to the FT and data from Rystad Energy, natural gas flaring in the Permian hit 209 mcf/d in 2017, a figure that ballooned to 407 mcf/d in the third quarter of 2018. Flaring levels are soaring, and could rise to as much as 600 mcf/d by the second quarter of this year. Wasted gas is an environmental disaster, but there is no sign that the problem will be resolved anytime soon.

Meanwhile, surging gas production should prevent a rerun of last year’s price spike. As seasonal demand begins to ebb in a few months as temperatures rise, pressure on inventories and supply will likely fade. That leaves little room for prices to rise from current levels.