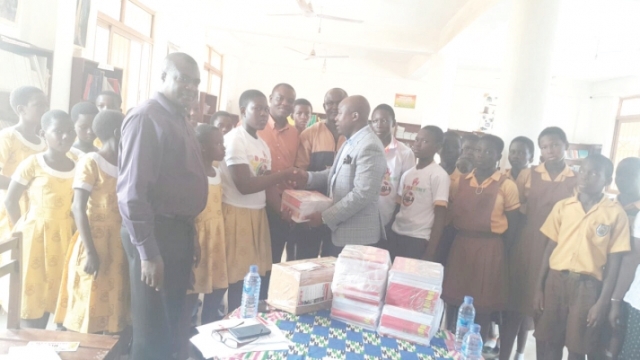 The Ghana Chamber of Bulk Oil Distributors (CBOD) has donated cash and items worth GH¢18,500 to two institutions as part of its corporate social responsibility (CSR) activities.

The beneficiary institutions are the Medical Women Association of Ghana (MWAG) and the Nima Cluster of Schools in Accra. They received the donations at two separate functions.

The Medical Women Association received GH¢10,000 to assist it to organise the Medical Women International Association (MWIA) Africa and Near East Regional Conference which was recently held and was on the theme: “The Obesity Pandemic: Helping the mother and the family.”

Dr Mabel Aboah received a cheque for the amount on behalf of the MWAG.

The Nima Cluster of Schools was given 1,000 copies of “Courtesy and Etiquette for Children” and 2,500 bookmarks worth GH¢8,500.

A pupil of the Nima Cluster of Schools, Miss Mavis Hoffman, received the items on behalf of the school and thanked the CBOD for the help.

The Chief Executive Officer (CEO) of the CBOD, Mr Senyo Hosi, presented the items and advised the students to be studious.

He told them that whether they were from a rich or poor background, the seriousness with which they tackled their books and studies would guarantee them a secure future.

The Executive Chairman of Wisewater Foundation, Mr Emmanuel Marquaye, through whose initiative the items were donated, thanked the CBOD for the support it had offered the two entities.