DEMYSTIFYING DOWNSTREAM: CBOD educates the press on petroleum pricing amidst complaints that recent reduction is insufficient 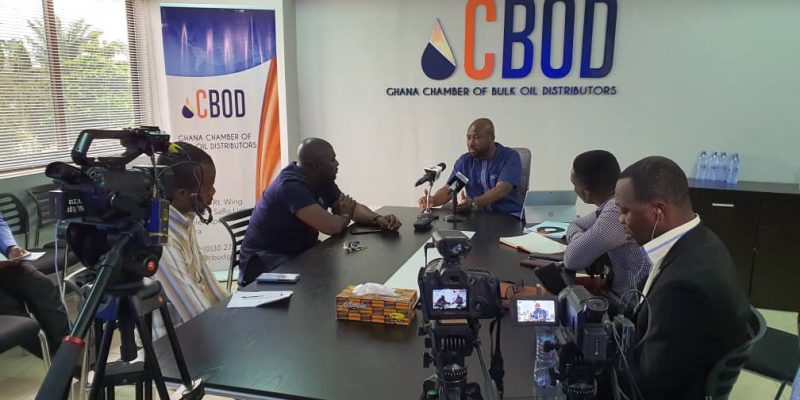 DEMYSTIFYING DOWNSTREAM: CBOD educates the press on petroleum pricing amidst complaints that recent reduction is insufficient

The Chamber of Bulk Distributors (CBOD) has met with the media to bring clarity to the petroleum products pricing amidst suggestions that consumers are being shortchanged following complaints the recent reduction in fuel prices are inadequate.

At a press briefing last Thursday, March, 19, 2020, CBOD CEO Senyo Hosi first noted Ghana uses the Import Parity Model, meaning the price is benchmarked to the world market prices. He also gave a breakdown of the price build up using the estimates of the CBOD Fair Market Price, Average Actual Market Price and the National Petroleum Authority (NPA) Benchmark Price from August 2019 to March 2020 explained that the actual average market price was higher than both the CBOD Fair Market Price and the NPA Benchmark Price. But, this situation subsequently changed.

“OMCs have been selling below market price, which will mean either they or the Bulk Oil Distribution Companies (BDCs) are giving away a good part of their margin and taking a hit.”

Mr. Hosi further explained that in February 2020 when the OMCs started pricing way above the CBOD benchmark, they were trying to recover a part of their losses in the past six (6) months, but they were still below the NPA benchmark price. It was only sometime around 5th March 2020 that the OMCs went above the NPA benchmark to recoup losses.

“It is for this reason that you will be hearing things like they’re trying to recover a bit of their cost.”
He stated that inasmuch as it is fair and right that consumers assert that fuel prices are higher than they should be, that is not balanced because prior to the OMCs recovering their losses, consumers had been buying at way lower prices while the OMCs were absorbing when prices were higher.

The journalists after the CBOD presentation said it had brought clarity and perspective to the petroleum pricing issue because of the expectation by many that once international oil prices drop, pump prices should automatically be affected in similar fashion.

“I think meeting the CBOD to explain to us the reason why at least even if there will be a reduction it would not as expected is a good one because they have made us understand that there has been some cost that they [OMCs] need to recover. – Ebenezar Sabutey, Joynews.

“Well, for some period the OMCs and the BDCs themselves have taken a hit when prices were going up and they kept prices at a level that affected their margins and now that prices are going down it is very important to manage expectations in terms of consumers expecting prices to go down to a certain level so that the OMCs can use this period to make some recovery. I think the presentation was clear. They graphs and everything, they were okay. I understood them; the figures and then the interpretation that was given to the graph, I think it was excellent.”- Lawrence Segbefia, CitiTV/radio.

The Executive Secretary of COPEC, Duncan Amoah who had hitherto said at the press briefing that the recent increment of fuel prices was inadequate and unfair to consumers later acknowledged that the data provided by the CBOD’s presentation to explain the pricing of fuel prices cannot be contested.
He called for transparency on the part of the OMCs with regard to pricing of petroleum products to avert consumer agitation.

“The expectation is that if it has to go up by 20 pesewas (20 Ghp) and you do 15[Ghp] you should let us know but if we do not get these communication and then you suppress prices only to come back to us another day to say you’ve made certain losses so we should now pay for it then there would always be a challenge.”

Mr. Amoah also called on consumers to be circumspect and look out for OMCs offering value for money.