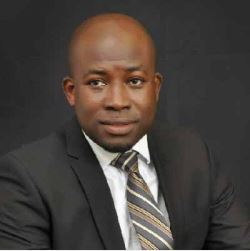 The Chief Executive Officer of the Chamber of Bulk Oil Distributors (BDCs) Senyo Hosi has denied confessing to the bribery allegations being levelled against him in a leaked tape currently in circulation.

At a press briefing in Accra, Mr. Hosi said the leaked tape is a quest to deliberately malign his reputation and that of the members of the Chamber by creating the impression that “the accusations of bribery to connive and rob BOST are true.” According to a Daily Graphic report,  some top officials at BOST supported some BDCs to rob BOST of petroleum products at the depots, leading to significant petroleum product losses that affected the national strategic reserve of petroleum products. The report said the criminal activities were used to create a negative balance of BOST indebtedness to the BDCs.

The BDCs has however denied the report.

A voice in a  leaked tape believed to be that of Senyo Hosi accused the BDCs of bribery and conniving to rob BOST.

But Senyo Hosi clarified the issue saying “The selective voice recording being circulated was not in any way related to the BOST stock audit… There is therefore no confession to the allegations associated and concocted in respect of the stock audit.”

According to the CEO of the BDCs, the said tape is a confidential recording of a testimony he gave three years ago before a Ministerial committee set up to look into complaints lodged by Petroleum Service Providers (PSPs) of extortion by some BOST officials in time past.

“We were the victims and not the accomplices. The recording was formally done and was not a secret tape. It was held in confidence by the Ministry of Petroleum and other committee members under an oath of secrecy,” he stressed.

He explained that the recording from the Ministerial committee was made available to Mr. Awuah Darko when he assumed office.

“It is an indictment on the Ministry of Petroleum that the recording, bound by oaths of secrecy, was leaked to the media only after making a copy available to the MD of BOST,” he claimed.

The BDC is therefore calling on the Minister for Petroleum to initiate an investigation to ascertain how “such a sensitive file was leaked to the media and has been actively circulated.”

They are also appealing to the President, John Mahama and the sector Minister to constitute an investigative committee to look into the issues of reconciliation and allegations of bribery as well as the leakage of the confidential tape.

Hosi however served notice that while his outfit is calling for the formation of the said committee, “it is fair to understand that BOST will be liable for any accruing financial costs for delayed payments of its liabilities to BDCs.”

He further urged all government officials and the general public not to be misguided by the stories circulating in the media.

Below is the full statement from the BDCs

We are grateful for making time to honour our invitation to attend this press conference to address misplaced allegations of fraud on the part of BDCs against BOST as reported in the media last week.

Referencing the E & Y report, the Graphic states that “the report further noted what it described as deliberate activities of top officials at BOST who supported the BDCs to rob BOST of petroleum products at the depots, leading to significant petroleum product losses that affected the national strategic reserve of petroleum products”. Curiously, the report itself neither used the above words nor could the actual findings in the report lead reasonably to the criminal extrapolations which the Daily Graphic publication bore.

The Graphic also reports that a comprehensive audit was undertaken on BOST from 2006. We regret to say this is not true. The exercise undertaken by Ernst and Young was a simple stock reconciliation from 2009 to July 2014 and a review of BOST’s own internal processes.

Many continue to confuse this stock reconciliation audit by E&Y initiated by BOST with the audit commissioned by the Minister of Finance to verify FX under recovery claims made by BDCs. These are two totally different audits undertaken by the same audit firm. To be clear, the audit on the FX under recoveries for July 2011 to December 2013 has been completed with government liability established.

More specifically, we wish to address the allegations as follows.

The report has in no way implicated any BDCs of having connived with any officials to perpetuate fraud or to rob BOST. We are however compelled as a result of recent reports to respond to some representations made in the report as being circulated.

Out of 16 BDCs audited from a pool of 28 today, the draft audit report indicates that it obtained adequate information on 8 BDCs in respect of which the audit assigned higher stock balances. The report indicates that in the case of the remaining 8, evidence attained was insufficient to establish the balances of these BDCs. As a matter of fact in the case of 5 BDCs of this 8, the evidence certified by the audit rather increases the undrawn stock position by 7,791% as against the reconciled position for Gasoil (Diesel). In the case of Gasoline (Petrol) 7 of this 8 will hold undrawn stock positions in excess of their reconciled positions by 1,038%. This only worsens BOST’s indebtedness to these BDCs. We must admit that even though this favours those BDCs, we are fully aware that it is inaccurate and requires further investigations to ascertain the true position.

The issue of fraud is serious and as a Chamber we will not countenance such acts by our membership. We therefore wish to encourage anyone with evidence of fraud to inform the appropriate state agencies for the necessary investigations.

Surprisingly in an act that smells of mischief, BOST, in its letter to the BDCs matched the receipts in Category B which are lower with the deliveries in Category A which are higher to simply paint a picture of a gargantuan negative balance for his customers, the BDCs. This misuse and deliberate twisting of the content of the draft audit report can be observed in Table 2 below. This illegitimate stock balance reconstruction by BOST suggest BDCs owe BOST over 2.13 billion litres of Petroleum Products, representing over 25% of all products receipted into the BOST system from BDCs between 2009 and July 2014. This by all standards is ridiculous especially when BOST has not procured a single litre of Petroleum product over the said period. To blind BDCs from this ill intent, he deliberately failed to advise BDCs with copies of the draft audit report. This is unethical and unfortunate coming from a public officer tasked with managing a strategic state institution such as BOST. The MD’s conduct hardly shows his support for the growth of genuine Ghanaian businesses. How will Ghanaian businesses grow and contribute to the prosperity of the nation when public officials deliberately and diabolically seek to unfairly destroy them by falsely burdening them with unlawful debts, and destroying their reputations in the process as well?

Respectfully, BDCs have served this nation, and with their bankers pre-financed heavy liabilities on behalf of the State and have bent our backs to consistently ensure supply of products to the Ghanaian public. We have grown from agents of foreign oil companies to become the drivers of an industry previously dominated by multi-national oil companies. The least we deserve is fair support to grow.

The tape is a confidential recording of my testimony given three years ago before a ministerial committee, the Agbenator Committee, set up to look into complaints lodged by Petroleum Service Providers (PSPs) of extortion by some BOST officials in time past. We were the victims and not the accomplices. The recording was formally done and was not a secret tape. It was held in confidence by the Ministry of Petroleum and other committee members under an oath of secrecy. The recording was made available to the MD of BOST by the Ministry upon his assumption of office. It is an indictment on the Ministry of Petroleum that the recording, bound by oaths of secrecy, was leaked to the media only after making a copy available to the MD of BOST. This we believe does not auger well for the cooperation of individuals and institutions when looking into issues of immense confidential importance. We hereby call on the Minister to take steps to investigate how such a sensitive file was leaked to the media and has been actively circulated.

Please judge for yourselves.

BDCs are for Ghana and we remain for Ghana!